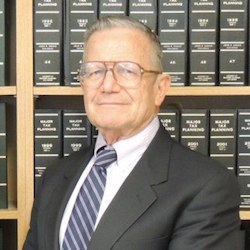 Howard Sanger began his career by taking a very non-traditional route. After earning his bachelor’s degree at UC, Berkeley in 1964, and a J.D. degree from UCLA law school in 1967, Mr. Sanger served two years in the U.S. Army, one year of which was a very long year in Viet Nam with an artillery unit in I Corp. With the help of the G.I. Bill, he earned his LL.M in Taxation from New York University in 1970. Bringing to the legal community a very extensive tax and estate planning background, with a no-nonsense approach to legal issues, Mr. Sanger has assisted clients especially in California, and throughout the United States.

Shortly after starting his law career, Mr. Sanger quickly became a name partner in the then largest law firm in the LA-suburb of Encino. He was admitted to the bar in 1968 in California and Kansas; admitted to practice before the US Tax Court in 1971, and served as an Adjunct Faculty Member of Golden Gate University Graduate Tax Program in 1978. He soon developed a reputation as a highly skilled tax and estate planning practitioner. In the late 1970’s Mr. Sanger transitioned his law practice to the Coachella Valley, while maintaining most of his LA-based clientele. Through the years, Mr. Sanger’s skills as a topnotch tax and estate planning attorney attracted numerous clients with both typical and complex situations seeking his professional services. CPAs and financial service professionals learned to rely on Mr. Sanger to assist their clients in resolving both routine and challenging matters that required his extensive expertise.

Mr. Sanger is a member of the California State Bar, and is Certified as a Tax Law Specialist by the State Bar of California Board of Legal Specialization.

Mr. Sanger is a co-author of Chapter 30 in the three volume CEB Will Drafting Treatise. Chapter 30 addresses many common will and trust fiduciary accounting, principal and income issues, confronting fiduciaries and beneficiaries.

He remains an active participant in the Desert Estate Planning Council. Mr. Sanger is frequently invited to speak on legal topics before such organizations as the California Society of CPAs, and the American Association of Attorney-Certified Public Accountants, and numerous Estate Planning organizations. Mr. Sanger has decades of experience in estate planning, trust and estate administration, tax planning, tax disputes, partnership accountings, as well as advising clients on establishing, buying, and selling businesses. Mr. Sanger has been named a "Superlawyer" in the area of tax by Superlawyer Magazine for the past ten consecutive years. He has achieved the highest Martindale-Hubble rating of AV, indicating that his peers hold him to a higher standard, at the uppermost level of professional excellence.

Mr. Sanger grew up in Los Angeles and became an avid baseball player and fan. His loyalty to the Los Angeles Angels has withstood many challenging seasons and baffling team name changes. He met his wife Barbara when they both attended UCLA, and the Sangers raised two wonderful children, which has resulted in four exceptional grandchildren. When not solving tax issues or studying the latest updates to practicing law “on the cloud”, you will find Mr. Sanger traveling with Barbara, visiting his children and doting on his four grandchildren, watching Angels baseball, or swimming laps daily at 6:00 a.m.

J.D., University of California at Los Angeles School of Law, 1967

B.A., University of California at Berkeley, 1964

The State Bar of California Board of Legal Specialization

Getting Optimal Damages In Trust Litigation

Contact Us
Practice Areas
Client Reviews
★★★★★
The Sanger firm has represented my family for greater than a generation, creating and recreating our family trust and wills, as well as innumerable leases and other contracts. I have solid trust in Howard's abilities, particularly his tenacious attention to detail and client needs.I cannot recommend anyone higher. M.S.
★★★★★
Before your negotiations with the IRS, the IRS's levies and tax liens, would have driven us out of business. Thanks to your negotiations with the IRS Revenue Officer, our company was not shut down, and our company is now back on its feet, and again successfully operating. Plus, an extra special "thanks" for serving as a buffer between us and the antagonistic IRS Revenue Officer whose aggressive "enforced collection" threats, made it impossible for me to sleep at night, and left me with blood pressure far above 80/120. M.Y.
Submit a Law Firm Client Review